Back Issues for Android - updated

This post is shameless self-advertising for Back Issues, a VERY small android project I created some time ago, which only has ~300 downloads on Google Play. I released an update today to fix some silly problems, hence this post.

As I wrote in the release post, it's a simple app to keep track of missing issues of books, comic series, manga, dvds or whatever. It consists of 3 screens.

Main screen: series list. It shows the list of the series you have inserted, with a quickrundown of the missing issues. 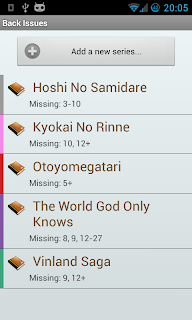 In the option menu, you can do the following
Long-tapping on a series in the list will bring the context menu, from which you can
New series screen: you can add a new series to the list. You will be prompted for the series name, the number of total issues in the series, and the number of the last issue you own. You can also choose a color. 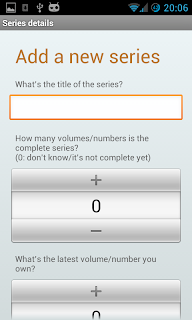 Saving the series will show it in the main list in "just inserted" state.
Tapping on it, you will be shown the missing issues screen. 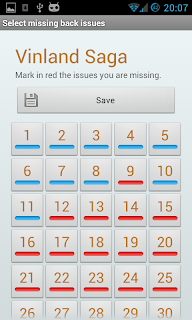 Here you can review the total issues of this series, and check/uncheck issues you are missing. Remember to hit "save" when you're done.

It's currently localized to english and italian. If you want to contribute another language, leave a comment and I'll get back to you.
Posted by Unknown at 2:31 PM No comments:

Our apps on Google Play